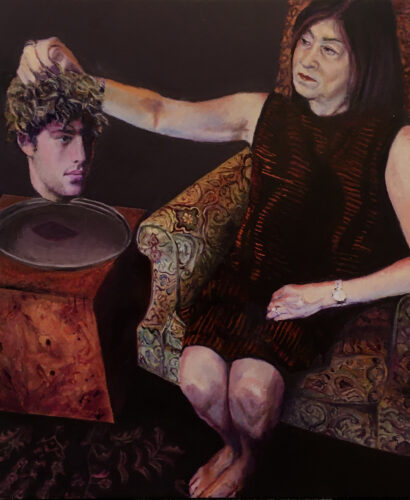 The Apocryphal story of Judith and Holofernes accounts how the beautiful Jewish widow is invited into the tent of Holofernes, an Assyrian general preparing an attack on the Jewish town
of Bethulia. She decapitates the general who is in a drunken sleep and consequently saves her town sending the Assyrians fleeing.

Many Renaissance and Baroque artists painted Judith and Holofernes including Cranach the elder, Mantegna, Caravaggio and the iconic version by Artemisia Gentileschi, Contemporary artists painted the highly dramatic story as well including Gustav Klimt and Kehinde Wiley who painted a black Judith and a white Holofernes.

Fenton’s version brings the story into contemporary times and flips the story line to make Judith a senior citizen and Holofernes an Adonis like young man, leaving the viewer to contemplate the psychological reasons for themselves.