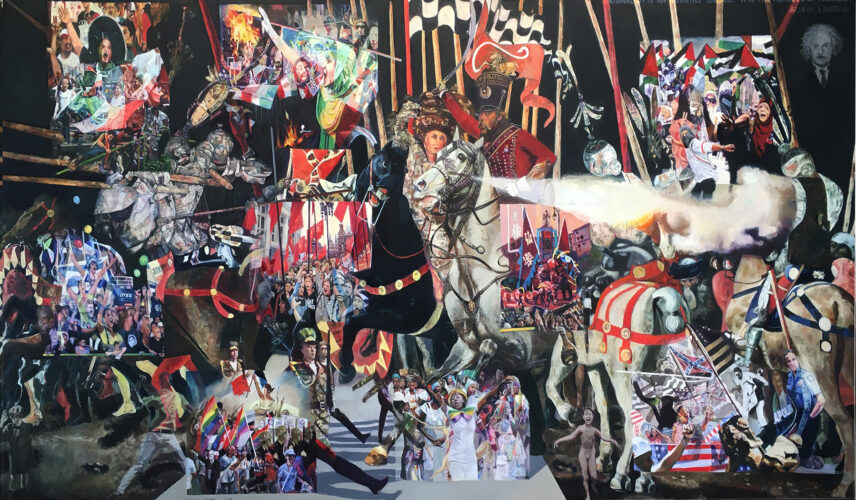 Divisions between Them and Us have long been sources of death and destruction. We are divided by nationalities, ethnicities, religion, language, skin color and political beliefs. Understanding that we are both a Them and an Us may lead to a more civilized society. This painting deals with damages resulting from divisions. As Albert Einstein observed, Nationalism is an Infantile disease. It is the measles of Mankind. Einsteins’s message is embedded in the painting.

Michael Fenton based his composition on the Paolo Uccello’s 1455 painting The Battle of San Romano. The battle was between the Italian city states of Florence and Siena. Wars that followed were similar except land masses were bigger and weapons were technologically advanced. Riding next to the central figure in Fenton’s painting is a charging cavalryman from Edouard Detaille’s Vive L Empereur, painted in 1891. Conflict changed little in the years between those paintings. Both Uccello and Detaille portrayed warriors wearing fantastic head gear and riding military decorated horses. Fenton uses iconic images such as the Vietnamese girl, burned by napalm and running naked and obscure images such as a the black man attacked with an American flag. All images are combined, juxtaposed, overlapped to create new meanings advance the artist’s painted ideas and build composition.

Inspiration for this painting derives from a political climate in which the American President builds a wall to keep Them out. Fenton considers this an outrage. Most of us are immigrants or descendants of immigrants welcomed by Emma Lazarus’s poem on the Statue of Liberty: Give me your tired, your poor, your huddled masses yearning to breathe free. The wretched refuse of your teaming shore . Send these, the homeless, tempest-tossed, to me, lift my lamp besides the golden door. The President calls for slamming the golden door shut!

Fenton hopes his painting will deepen viewers’ understanding that fusing of Them and Us into We will lead to a more just, tolerant, and benevolent world.